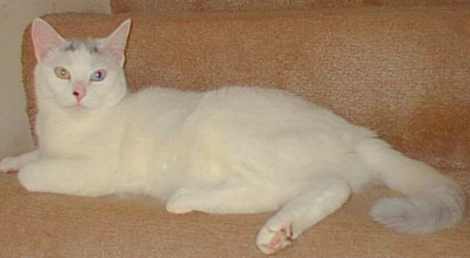 This bi-color eyed beauty was found by Kitty Angels on the 4th of July in 1995, when she was only about 2 months old. She was adopted by Patt and John later in July and named Sherry. She loves to chase balled up papers, and return them to whoever threw them, so she can fetch them again! She's very sweet, and loves to play and to be petted. Sherry is Patt and John's 2nd 'Kitty Angel.' 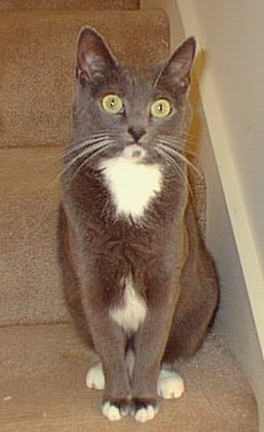 Tabitha and her 5 kittens were found in 1996 living in a woodpile. The kind lady who discovered and fed them was eventually able to capture them and bring them to Kitty Angels. Tabitha's tail had been broken off and the bone was sticking out, but with surgery her tail was mended, and it healed nicely. In August 1996 she went home with Patt and John, becoming their 6th Kitty Angel. Oh, and that kind lady, Marie, ended up adopting 2 of Tabitha's kittens - Misty and Splash. 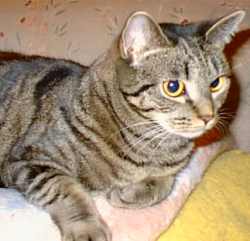 Asia was found with her mom, Elsie, by a Kitty Angels volunteer in 1996. She was adopted by Patt and John in March 1997, when she was approximately 11 months old. While she is still a bit nervous and does not want to be picked up, she likes to be petted when she is in one of her 'safe' places, and likes to snuggle with Patt in bed. She also loves to be brushed, and is almost ready to climb all the way (instead of half way) onto Patt's lap for brushing. She is the 9th 'Kitty Angel' for Patt and John 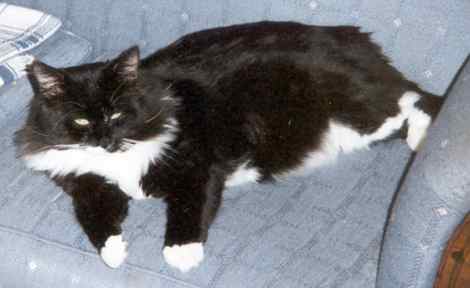 BJ was a 3-1/2 year old, scruffy-looking cat when he was adopted by Bob and Paulette. They write, "He is the most loyal and loveable cat we could have ever hoped for. He never leaves our side and we just absolutely love him.  Looks can be deceiving."