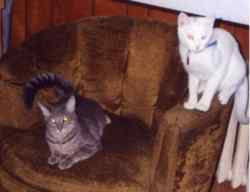 Fog, on the right, was adopted at the age of seven months in June 1999 by Scott and Jennifer. They write, "He was a little skittish for a couple of months, but he is coming along great. We still haven't been able to pick him up but he loves to be patted. Fog gets along great with Yakko (on the left). He has been a great addition to our family. Thank you 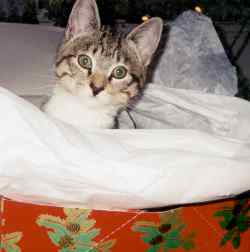 Boz is "the King of his castle", a three-floor townhouse, writes Carole. 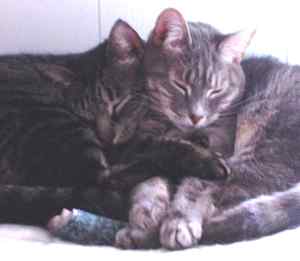 Heidi was adopted at the age of four months by Melissa in May 1999. She is shown here with her brother Diddy, who is on the left. Melissa writes, "Heidi is doing very well! She now has seven other brothers and sisters and she gets along wonderfully with all of them. Heidi took a long time to open up to us, she was so frightened for the longest time. She is a very sweet and loving girl who we are very very very happy to have a part of our family." 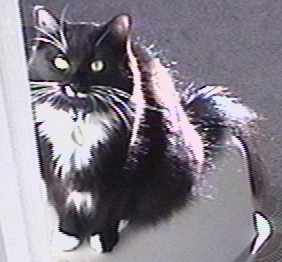 Bug was adopted by Fred and Helen in December 1998.  Fred writes, "She is doing great. We were given another stray girl cat and they have become good friends and she loves playing with all the boys in the house. We have renamed her Isabelle but she still goes by Bug."