Chessie was adopted by Michele and Doris in October 1996 when she was almost a year old. Her favorite spot in colder weather is the rocker by the heater. She loves to play on her screened porch and hunt the occasional bug, and also likes to play "fetch" with her mousie. 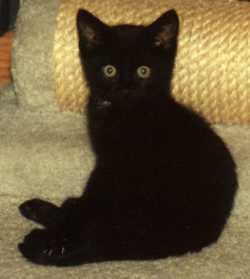 Sam was a literally a "throw away" kitten - his previous owners were going to throw him through a window screen! He was rescued from them and Kitty Angels volunteers went back to get his mother a week later. Sam was adopted by Debbie. 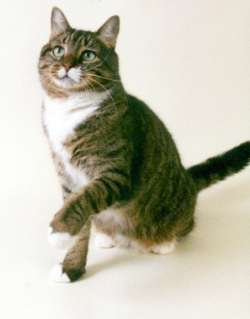 Munchkin was adopted by Dave as a kitten in August 1994, and is still a crazy cat. When Dave sent us this updated picture, he said "He hasn't gotten less crazy; though he seems to like to pose, and isn't at all camera shy." 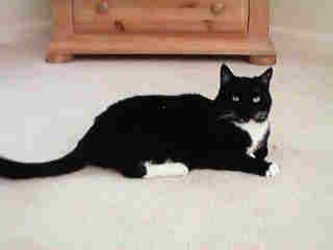 Arby was adopted from Kitty Angels in January of 1997 when he was about 1-1/2 years old. He has been a cherished member of Chris and Tom's home ever since. Unlike his sister and two brothers, Arby is quite reserved. He prefers being brushed as well as exchanging head rubs and kisses with Mom. A unique trait of Arby is that he only drinks with his foot.; He cups his paw, dips it into the water and scoops the water into his mouth. He is a character!