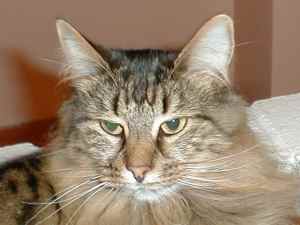 I know it's been awhile since you have heard from me. I just wanted to let you all know I am doing very well. Since I was adopted in May 2000, I have a wonderful new life. It took a little getting use to at first but now it's as if I've always been with my family.

My new family consists of Peggy, Albert and Avalon. Avalon's a wonderful little girl who likes to play and pet me a lot. I let her for a while then, I'm off to my cat tree to race up and down it and look out the great big bay window. From the top of the cat tree, I can see all kinds of birds, squirrels and chipmunks! Life is wonderful here. I also have a younger cat sibling. His name is Patch. He is an orange and white calico cat. Patch and I get along very well. However, being the older sibling (he's only just turned two) sometimes I have to smack him on the head! Just to let him know I don't want to play anymore and to let him know who's boss! Mostly, we get along. We look out the windows to see how many small animals we can find. We both get excited on Fridays. That's when we get our special treat for the week. Canned cat food of the seafood variety. It's wonderful!

I hope all my friends at Kitty Angels get adopted into a nice home just as I have. 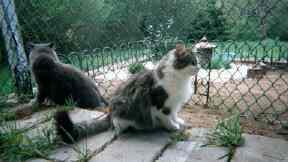 Captain and Julie were adopted by Andrew in late 2000. Andrew writes, "Here are some pictures of Captain and Julie in their enclosed patio. (We've since upgraded from the cyclone fence to sturdy fiberglass mesh - it keeps the cats in and the mosquitoes out!) Both Captain and Julie seem quite happy here. Thanks for bringing them into my life!" 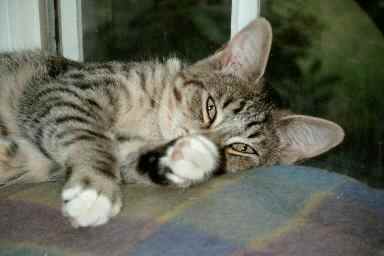 Bridget writes, "We adopted an 8 week old kitten (now named Riley) from Kitty Angels in April 2001. Riley quickly became an important part of the family! He loves playing with our other cat Kaylie and often sleeps with my 16 year old daughter at night.

"Kitty Angels is a wonderful shelter with a helpful and caring group of staff! I hope you continue your great work for years to come!" 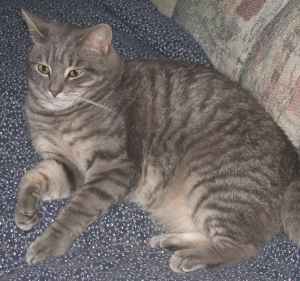 Paul and Lisa wrote, "Gizmo (named Robert at the time of adoption) was adopted in August of 1998. He is a wonderful little guy who spends most of his time lounging on his blanket on our living room couch. Gizmo is the first to meet us as we get up in the morning. He runs to our bedroom the minute he hears movement, where he kisses our fingers and gives us head butts. 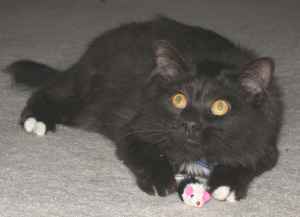 "Elmo (named Matt at the time of adoption) was adopted in March of 2001. Yes, Elmo and Gizmo. We call them the Mo brothers. Anyway, Elmo is a little terror. His favorite pasttimes include playing fetch with his toy mouse, watching birds through the front screen door, and hunting down any catnip in the house (no matter where it is hidden). Elmo is very lovable and likes to be held. He also loves drinking from the bathroom sink, but only if the water is running over his head. He has also been known to jump in the shower with one of us and not be fazed."