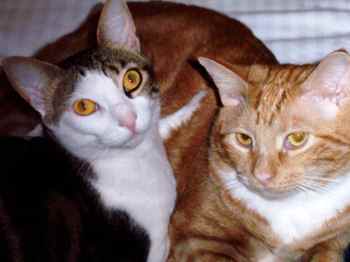 Scott and Charlotte write, "Theo (on right in picture), or Theodorable as he was called, we adopted in November of 2002. We saw his picture and knew we wanted to see this cat and possibly adopt him.

"He was a lot of work. He was a feral cat and not used to being handled, spending much of his time under the bed, and coming out when he wanted to. Our other cat Gracie (on left in picture), adopted a month before Theo, was just the opposite, and we thought the two would balance each other out. This had started - she tamed down with her new friend, and Theo 'came out of his shell'. Then the unthinkable - Theo escaped outside, and reverted back to a feral cat. the people at Kitty Angels were a huge help in getting Theo back, providing the humane traps that eventually helped to capture Theo from the woods.

"Once back home, Theo was like a completely new cat. Friendly, outgoing, turning into a lap cat, vocal about his presence around us (he meows quite often now). These days, he enjoys playing with his sister Gracie, enjoys playing around the house, chasing leaves through the window, and bugging us when we make our lunch for the day. We are very happy to have Theo and see his transformation from a quiet, nervous cat to the pleasurable pet he is today, and could not imagine not having him as part of our family. 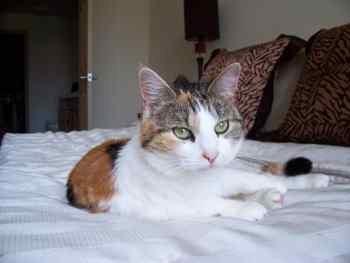 Debbie writes, "I recently adopted 'Tiara' (formerly 'Xena' - 2 1/2 yrs at adoption) in February 2004. Craig and I are very excited - Timber (also adopted from Kitty Angels - see Alumni page 26) and Tiara absolutely love each other - they are always playing. Tiara is quite the little instigator - she often sneaks up on Timber and gives him a big thump on the butt with her front paws only to run away in a mad dash while he chases her in an effort to tackle her! We need to get a bigger bed now to accommodate the whole family!

"Tiara loves to sleep tucked under the covers - she will in fact scratch at the covers until I lift them up for her to crawl under. My favorite 'Tiara moment' is when she comes to lie in my arms - she will purr while I pet her and stare into my eyes - then she will carefully place one paw on my face. She will even lift her paw up to look at me and put it back on my face! Tiara is a total joy and a perfect complement to the family!" 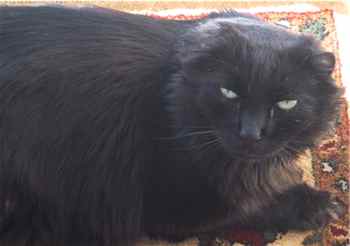 Jim and Bonnie write, "We adopted J.P. in June 2001. We don't have an age for him, but he's even more playful now than when we got him three years ago. Although his ears were damaged by a bad mite infestation, that just makes him all the more unique. He is the biggest 'luv-bug' you could ever imagine! Whenever we come home, he runs to the door to greet us. His personality is amazing and he's incredibly smart. If he's in the mood, he can be quite conversational too. 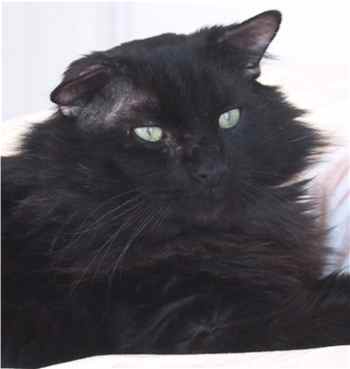 "We adopted Doc (Guy) in April 2003. He was probably about two years old. It was a little tough at first, but thanks to Joan and Julie, we got the boys to become buddies. Doc is a complete sweetheart – we call him our 'kitten-cat' because he is so much more like a kitten than a grown-up cat. His favorite game is to carry a plastic toy around in his mouth and put it in a paper bag. He sleeps on Jim's chest every night; if Jim isn't in bed when Doc jumps in, he looks around for him as if he can't sleep without him. J.P. and Doc have brought more joy and love to our family then we ever thought possible. Because they have brought so much love and happiness into our lives, we'd really like to try to encourage people to look at the 'older', sometimes 'down-on-their-luck' guys. Thank you Kitty Angels for giving us two wonderful gifts!"

Tulip was adopted in January 2003 by Myles, who writes, "We have had Tulip for a year and have learned that she is a very sweet cat! She is still a little nervous around some people, and she is very independent. She is always doing things her way when she feels like it. We all enjoy playing with her and cuddling with her and just having her around.

"Tulip is a very talkative cat, too. She loves lying on clothes, blankets, and just about anything you can think of! We all love her with all our hearts. We couldn't have hoped for a better friend."