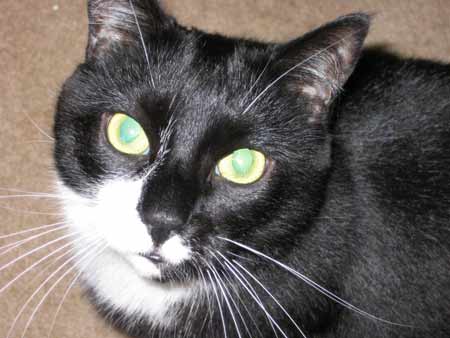 "One night (a Friday in February of 2007), i ventured into the Petsmart in Nashua, looking around while waiting for my family to return from the sports store next door. They came in and were pulled towards the cats in the Kitty Angels section of the store. We looked at all of the cats and one particular cat caught our eyes. His name was Smitty, and was white and gray, and looked very playful. We all decided to come back in the morning to get him. My mom was a little hesitant though, seeing as our cat of 15 years, Sammy, had just passed away. 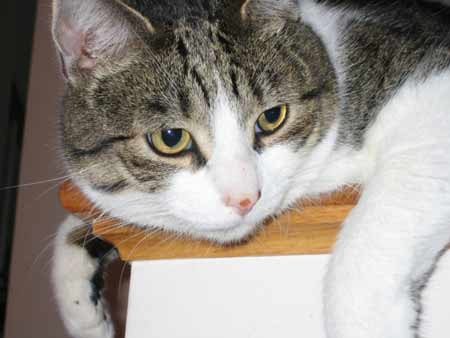 "The next morning me and my mom drove up to Petsmart, and looked around, but Smitty had already been adopted. We were very disappointed, but we looked at the rest of the cats, and saw these two munchkins (they were in the same cage). When we asked to go check them out, and pet them, we walked in, let them out of their cage, and Carter (bottom) came bounding out of the cage, and was purring like mad and rubbing himself against us. Miller (top) walked up, sniffed us, and rubbed himself against us, trying to get as much love as possible. I thought it was impossible for someone to give up these two cats! They are sooo lovable. We decided right then and there to adopt them.

"They've been with us for about seven months now, and they are still as lovable as they were when we got them. We get our laughs, because Carter is such a big cat, but can barely meow, and Miller loves to get snuggled up under the blankets. They are two joys in my life, and although they dont always get along with my other cat, Sammy's sister Lady(now 16), i still love my cats, and thank Kitty Angels for bringing them into my life!" 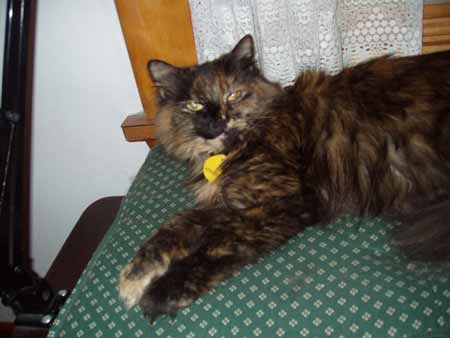 Amba and Bob write, "Tanji (formerly Maple) and Biffie (formerly Luane) were adopted on May 31, 2007. Biffie, rescued pregnant from the streets of Nashua and subsequently aborted, is a tabby shorthair tortie with perhaps a touch of Siamese. Tanji, rescued by a cherrypicker from a tree near a remote fishing spot, is a longhaired tortie beauty (and knows it) who seems to be at least part Maine Coon. Both started out traumatized and scared: Biffie of abandonment (and of trucks going by the house), Tanji of other cats and us. We poured on the affection, and got them through the worst of their fears, but it took a long time. Biffie, a tiny 7-pound scrap of a kitty when adopted, must have starved on the streets, for she ate like a horse and is now large, sleek, and strong at 11 pounds. 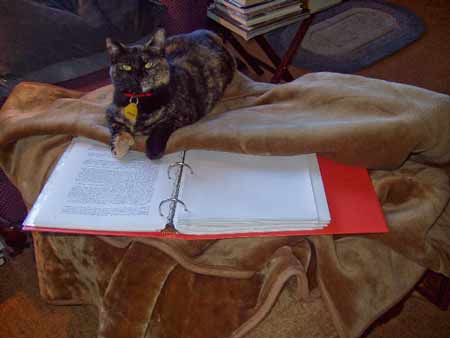 "They spent the summer mostly separate, Tanji upstairs, Biffie downstairs. Biffie was almost frantically affectionate and would have been happy to make friends. But Tanji, who had been bullied by another cat in a foster home, hissed and spat. Tanji needed her own room where she could feel safe and unthreatened. This lasted for about three months. Then suddenly in mid-September Tanji came downstairs ... to stay.

"They fought intermittently for about three weeks, with stampeding-herd-type chases all over the house. Then suddenly they were play-fighting. Now they seem to have settled who's what, and though there are still chases they’re largely playful, and growing closer. As I write this, they just touched noses - that would have been unheard-of as little as a few weeks ago. 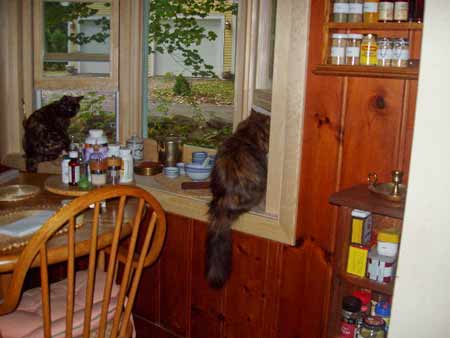 "Both cats are still skittish and wary owing to their traumatic history, but their affectionate natures are now coming uppermost, and each of them now takes it on herself to choose times to come and be lovey. We hadn't even known when adopting them that torties have such a formidable reputation, and that two tortie "queens," as the term is, in one house can be a very difficult challenge. But we'd raised part-feral cats before, so we were prepared, and the results are wonderful. We're so grateful to Kitty Angels for a chance to get to know and love these two and share our home with them. " 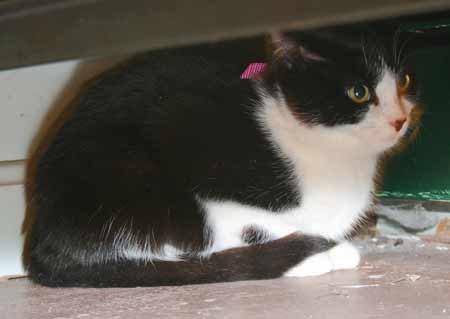 Shari writes, "I adopted a kitty in November 2007 and we have named the kitten Tasha. Tasha has been in our house less than 24 hours and already she is coming out of her hiding space by herself. She lets me hold her for a few minutes and will let my daughter pet her. She did cry most of the first night which we expected. My other cat has been sitting at the door waiting for her to come out and play. We look forward to the day that we can play with her and our other cat together. Thanks for taking care of Tasha for us to adopt." 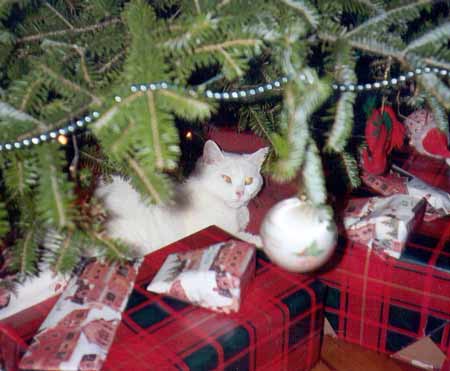 Paula sent us the sad news of Sheba's passing. "Our journey began on October 30, 1990 at a Kitty Angels barn in Tyngsboro. She was sitting on a shelf, and I immediately fell in love with her. Sheba became my best friend and soul mate seeing me through many good and bad times for eighteen years. We conquered many illnesses along the way, however, we could not defeat cancer. On Saturday, November 10th, 2007 she looked at me, and I knew it was time to let her go to the Rainbow Bridge. With mama and papa by her side, she peacefully crossed. She enjoyed laying under the Xmas tree. I would like to thank Kitty Angels for allowing me to find my best friend and all the wonderful lives you have saved."