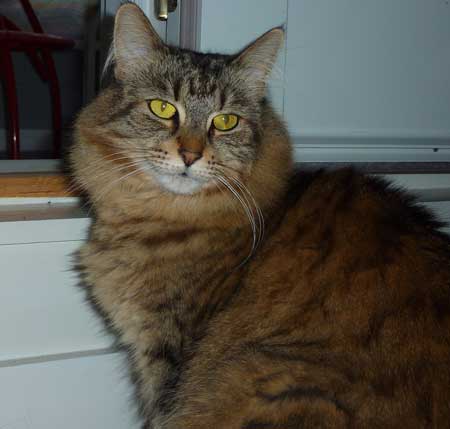 This is Blossom, who was featured in Issue 7 of the Kitty Angels Newsletter, where we told you about a cat who was so hungry that she flung herself into a vat of cooking oil!

Blossom was adopted by Carol, who writes, "We renamed Blossom, Miss Lily Blossom. She mainly goes by the name of Lily. She is doing great. A very happy, healthy 12+ pounds cat! She has her home in Chelmsford and also at York Beach Maine. She doesn't mind riding in the car preferring to sit on my lap instead of in a carrier when Fred drives so she can see out the window as we travel. She really perks up when we go over the big bridge between Maine and New Hampshire and gets excited when we turn off at the exit for York.

"From her window perch in Maine she seems to understand the ocean is a different view and thoroughly enjoys the seagulls. She knows Happy Hour, perching herself on one of high balcony chairs to enjoy our company and any of our visiting friends. At home in Chelmsford she has a relaxed schedule with favorite windows and quiet napping places! All in all a great life for a cat who almost starved to death."

Lyn writes, "Yogi could be the poster boy for older cats. I've never been a kitten person, and would take a golden-ager kitty over a baby any day

"I adopted Yogi from you in November of 2003, when he was 10 years old. He was returned to Kitty Angels when his family decided they wished to travel, or so I was told. At close to 18, he is still a happy, healthy boy. I thought he'd make a good companion for my elderly Lynx-point female, Danielle, who had recently lost her long-time buddy, Kevin. Mild little Danielle did not take to Yogi, and spent most of her time chasing and menacing him. He was younger, bigger, and much healthier than she was, but he never raised a paw to her. He was a complete gentleman, treating her with patience, meeting violence with non-violence, and generally behaving in an exemplary way.

"Now that Danielle is gone, Yogi is happy to be the king around here. He adores sleeping on "his" couch and my bed. When there is thunder, he takes refuge in the closet in the back room, which evidently has magical protection properties. He shows no interest in the outside world, never trying to escape from the condo. He eats well, and loves his pre-lunch and pre-dinner snacks of people food, but does not beg at the table. Yogi is a connoisseur of catnip, both fresh and dried. He's the easiest, nicest cat in the world, and I am so grateful to Kitty Angels for letting him come live with me.

"To all you cat lovers out there, consider giving older cats a home. They are the best." 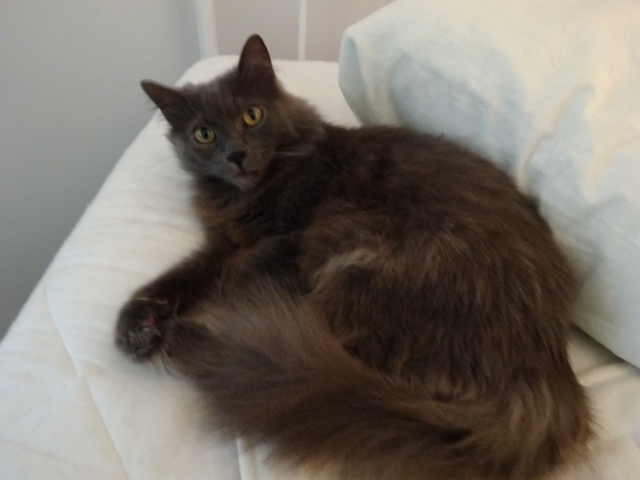 Bob writes, "This is a picture of Davey. a fiveyear old male - very shy. A difficult adoption due to shyness and distrust. Davey came to us two months ago and has slowly come out of his shell. He lives with his two new brothers, Flurry (10 year old white Persian) and Sterling (18 year old diabetic Maine Coon), as well as my wife and me." 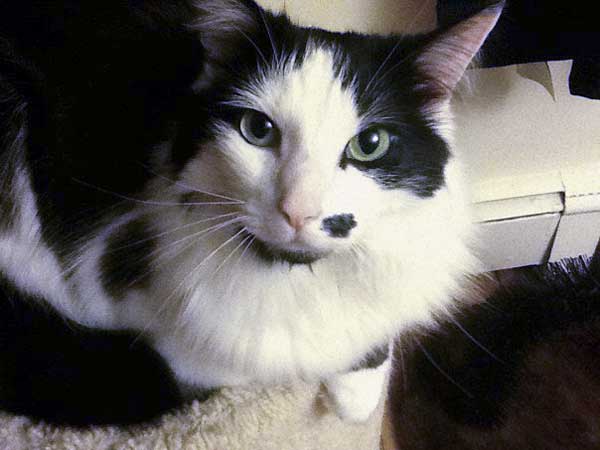 Nancy writes, "I wanted to let you know that Marilyn (adopted at age 2 in January 2009) is a very happy, healthy cat. She's zany, quirky, and funny. She enjoys watching birds at the feeders outside, which Brian lovingly keeps filled to keep Marilyn entertained. Miss Marilyn is a fancy girl and she commands attention, and she does so by "fluffing" her fluffy tail against our legs, and often announces her presence with a coo. She also enjoys chasing a laser pointer and leaping at toy mice that are tossed into the air. She's really got a high vertical leap! She often leaps at the wall (when apparently Marilyn is the only one who can see something to leap at) and has been known to jump about six feet into the air, before bolting off in the the other room at a full gallop with a mighty coo.

"Although Marilyn loves playing A LOT, she really loves to cuddle and spend time with her adopted parents. She loves laying with Brian and I while watching television, but she has to lay on her blue Snuggie. Bedtime is always nice too, because she insists on laying in the bed: usually at our feet or between us during the warmer weather, and under the covers in the colder months. She just loves to purr, play and cuddle. I couldn't image our home without that gorgeous, loving, kitty face!"