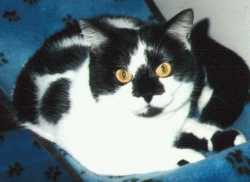 Elsie and her kittens (see Asia) were rescued near a dumpster in Nashua, NH in June 1996. Elsie DEMANDS attention - if she can't get on your lap, she jumps onto your shoulders and rubs her face against yours. She became Patt & John's fourth 'Kitty Angel' in August 1996, when she was about 13 months old. She was adopted at the same time as Tabitha and Tiffany. 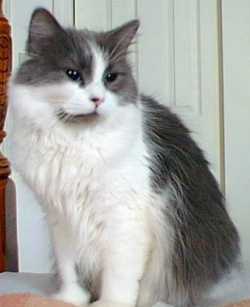 Tiffany was found outside an apartment complex at the young age of 7 months in June of 1996. Although a birth defect affects her eyes, she has the sweetest disposition of all the cats adopted by Patt & John. She became their fifth 'Kitty Angel' in August 1996, and was adopted at the same time as Elsie and Tabitha. 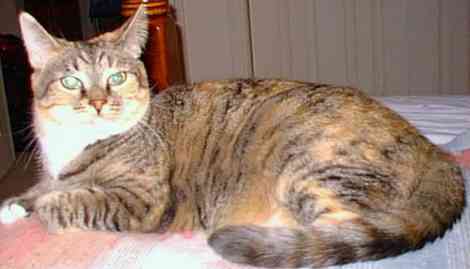 China is a sweet girl that likes to play, talk, and eat yogurt raisins. She and her 'brother' Roscoe were raised by the same 'mom' cat, but you'd never know they weren't from the same litter! Adopted in November 1997 (at 9 months old) with her 'brother' Roscoe, she became Patt and John's tenth 'Kitty Angel.' 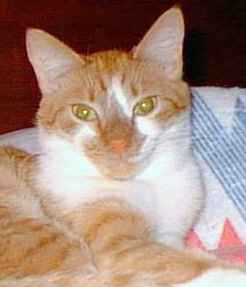 Roscoe is a ball of energy - he only stops playing when it's time to eat or sleep. Most evenings he can be found in the upstairs bathroom, trying to catch the water dripping into the sink. He usually gets more water on his head than in his mouth. He was adopted in November 1997 (at 10 months old) along with his 'sister' China. Roscoe is Patt and John's eleventh 'Kitty Angel.'

A sad update - Roscoe died June 24, 2001, from hypertrophic cardiomyopathy, a heart condition that difficult to detect until it becomes serious. Patt and John wrote, "He was a little guy who did things in a big way. We will sadly miss our 'cute little orange guy.'"