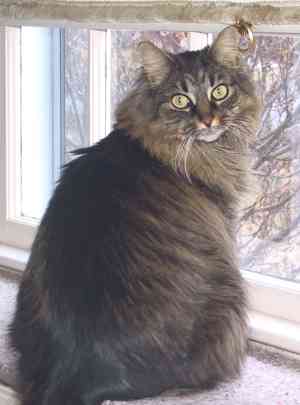 Emily was a little "bag of bones", weighing just one pound at 9 weeks old, when Steve and Leslie adopted her in June 1999. This picture is from 2003, when Emily weighed over ten pounds! She joins Duncan, Lacey, Jeremy, Keira and Quillan (below) in her new home. 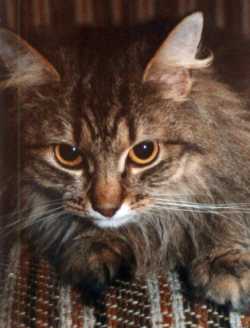 Nikita a.k.a. Sweetie was adopted by Misty in February of 1997. She was approximately 1 year old at the time of her adoption. She was very timid and very quiet upon her introduction to her new home. That changed within a matter of months. Little Nick is now the "Queen of her Castle." 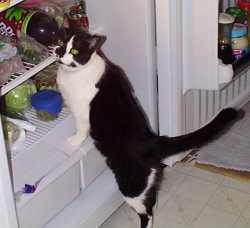 Wissi was adopted in March 1996 by Sandae, who writes, "She is a sweet joy who loves head rubs and back scratches." Here, Wissi is wondering where her turkey is.

Quillan was adopted by Steve and Leslie in July 1999 when he was about three months old. This photo is from 2004. He is long and lean, with a long bushy tail, making him look like a fox. Quillan is an affectionate, purry, cinnamon boy, (but a bit of a "lout"),  who loves to play with everyone, cats and people alike. He shares his home with Emily (above), Duncan, Jeremy, Keira and Lacey.