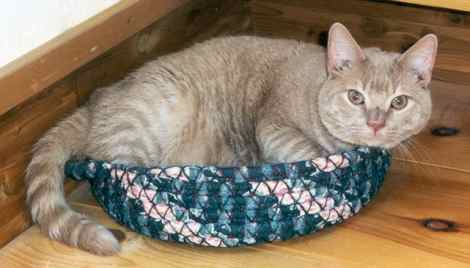 Fintan, formerly known as Pesto, was adopted in May 1998, by Suellen, who writes: "Quickly adjusting to life as a 'big city' cat, he spends many mornings in the best window for watching traffic and eavesdropping on people's conversations.   Fintan's favorite things are few but simple: food, toys that can fly, chattering the ear off his big sister, and raspberry-colored velvet chairs.  There's nothing like coming home to the chirpy greeting of this favorite guy.  Thanks, Kitty Angels, for pairing us up!" 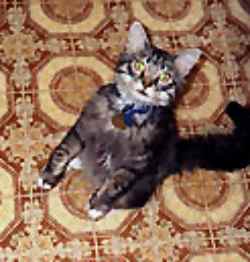 This is Tigger, adopted by Donna, who tells us,"Tigger is doing great - he is getting huge!!! No signs of timidness anymore - he rules the house. He doesn't hide when people visit anymore, and has even traveled to my parent's house for visits a couple of times. I'm concerned about how he will react to the move though. He is already confused about all the boxes in the house. I hope he will adjust quickly." 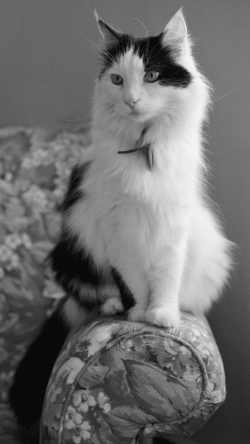 This handsome boy is Christopher, adopted by John, who writes, "After adopting Christopher in April, we found him to be one of the most wonderful cats. After some adjustment getting use to being with the two other cats we already had in our home, Christopher is my little shadow. He follows me everywhere and makes a point to place his paw or head on my arm when I am on the computer or watching TV. He makes our life so happy." 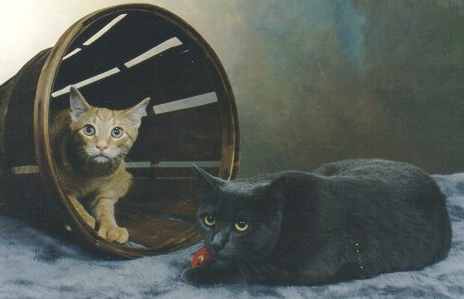 Lisa and James adopted Bungee in June, 1999. They write, "He is our second kitty, the baby brother of the house. When we adopted him, he was just over three months old and weighed only three pounds. Since then, he has gained five and half pounds, and is a very healthy little boy... He loves to play with his toy mouse, and to chase and play with his big sister, Pebble, around the house. He has got a lot of energy, sometimes we don't even know where this little fellow gets his energy from!..

"Bungee is the kitty in the bucket, and next to him is his big sister Pebble. Bungee is a lot of fun, we are all very glad to have him join our family. Thank you Kitty Angles for pairing us up..."