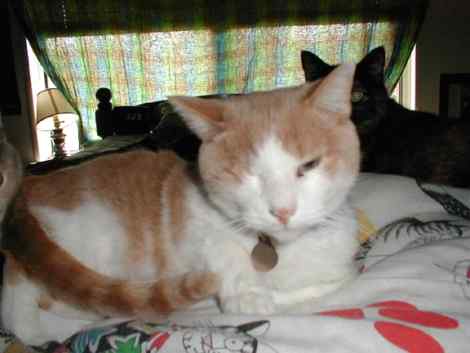 Jessica writes, "Sir William (shortened to Sir shortly afterwards) was a feral cat I adopted almost a year and a half ago, and despite his reticent nature at first, he has really warmed up. He loves laps and fights over any available one in the house. He loves to sleep on my pillow so I have to breathe cat fur all night, and to wake me up when he's hungry by purring in my ear. He has a tendency to go into the empty bathroom and just sing at the top of his voice.

"He, by far, is my most affectionate cat, both with people and other cats. He loves his three adopted sisters and plays with and grooms with all of them. He doesn't like being picked up, but sometimes tolerates it when he's in a good mood.

"Thank you so much for my sweet boy. " 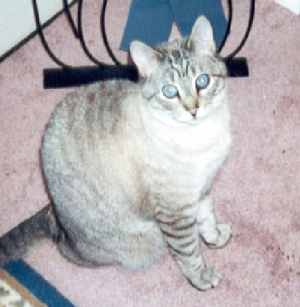 Milo was adopted by Paula in the fall of 2000. Paula writes, "Milo was found at 8 weeks old on the streets of Methuen and was badly abused. His eye had been punctured. When I brought him home, he lived in my bathroom for weeks. I would sit on the floor, hold him in a towel and tried to gain his trust. He was beginning to trust me when he developed URI. He was at the vet every week. I had to make a decision living in a condo and having three others so Milo went back to the shelter.

" I was heartbroken and felt like I had failed. Milo wasn't happy going back to the shelter and he let everyone know it....Helen would tell Milo that if he was a good boy maybe he could go home. After three months his condition seemed to become stable. Helen was going on vacation and didn't know what to do with the little guy. He was mean to everyone....so Milo came to stay while Helen was on vacation. But he never returned. He had learned to trust and love his new home.

" He is now medication free, happy and such a beautiful boy. We are truly blessed to have each other. I have to thank Kitty Angels because without their help during that difficult time, there might not have been a happy ending." 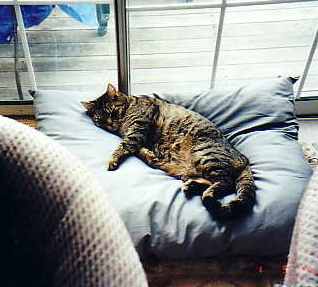 Bernard, aka "Nardo", was adopted November 2001 by Christine and Phil, who write, "He had been hit by a car and had stitches when we got him. Now, you would never know anything had happened. He is the most loveable and affectionate cat. We have so much fun with him and he is doing great in addition to believing he is king of the household." 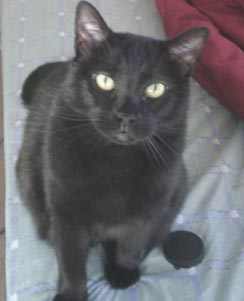 Janna and Max write, " Orli('Yadda' was her name at Kitty Angels), was adopted in January 2002. Ever since she came to live with us, she has filled our lives and hearts with a joy I never knew. I never grew up with a cat, so I was unfortunately, a little skeptical when my husband insisted on adopting this cat. However, Orli has quickly won me over; whether its sleeping, eating, watching TV or playing a game, we always include her. In fact, she's not really a cat to us, she's more like our baby! We just wanted to thank Kitty Angels for rescuing this cat!! We couldn't imagine our lives without Orli now. Thanks again!"