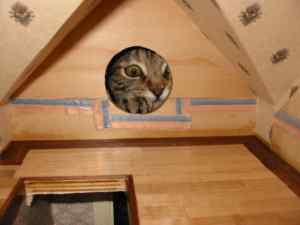 Diane writes, "Last September, my dearly loved twelve year old cat, Minty, died. The best tribute I could give to this extraordinary cat was to adopt another homeless cat. In January 2002 I adopted three month old Sophie Rose. It has taken time and patience to convince ten year old Betsy, Kitty Angels class of '91, that Sophie should stay. It was worth the effort! Sophie seems to have more than her share of personality and affection. She warms my heart and puts a smile on my face. Minty would approve." 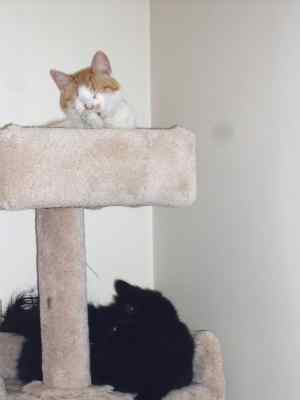 Lin writes, "Here are best buddies and Kitty Angel alumni Graham (the top cat in more ways than one) and George, his more relaxed brother. They've allowed me to live with them since 1999. They send their best to all their Kitty Angel brothers and sisters." 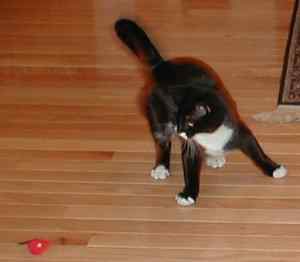 Bryan and Katie write, "I am happy to report that Prince has truly become a part of the family. From day one when he toured the entire house with me and settled right in after rejecting the 'bathroom initiation.' He has slept on our bed with us ever since.

He is quite playful, very friendly and social - even with newcomers to the home. He is definitely NOT a hider. I have attached two pictures for your scrap book - one of leisure and luxury on the bed with a big toy mouse and the other an 'action"' shot (above) with a mini toy mouse that seems to really excite him.

We are happy to have such a wonderful addition to our household and to be able to assist you in giving a home to a kitten that lost his way (or had it lost for him)." 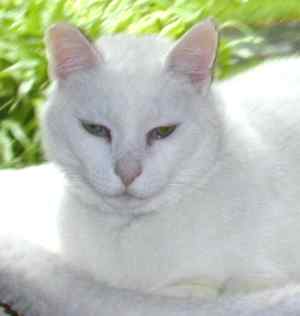 Steve writes, "I just wanted to let you know that Aspen is adapting well to his new
home since he arrived a month-and-a-half ago. He settled in right away, but at first was a somewhat tempermental and untrusting. However, he has since adjusted well, becoming friendly and talkative and always looking to be petted when I get home.

"He does enjoy watching all the birds and squirrels from his window, however, but since he can't chase them I make sure to have lots of toy mice around for him to 'catch' when he's running around after his hunting instincts have been triggered. Since this probably makes him think he's outdoors, he only seems to like drinking water when he's in the bathtub or the sink while the faucet(s) are being run a little bit, as if he's drinking from a stream (his puddle/waterdish is kept full anyway). His favorite game, though, is tug-o'-war. I try to give him several matches a day not only for his enjoyment, but to also make sure he stays in shape given all the food he eats. I think it's working since he might have gained another couple pounds since the vet trip but it appears to be mostly muscle - he's a strong boy!"