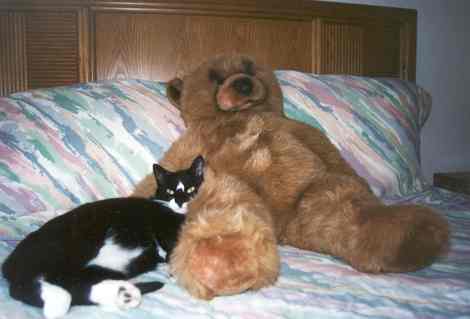 Charles was adopted by Carolyn in October 2002. She writes, "Charles had been a feral kitten, but is now friendly, social and happy, and he loves his 'Mama Bear'." 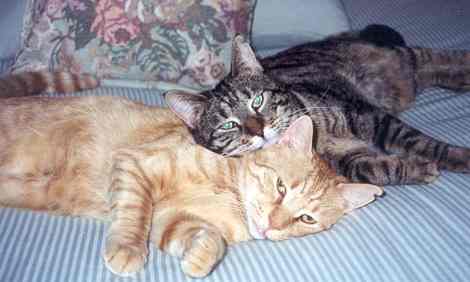 Paige writes, "In February 2003, Emma (right) was adopted and reunited with her brother Cosmos (left). This is yet another Kitty Angels success story thanks to the never-ending love and dedication from the rescue team. From the first moment the cats were reunited, there seemed to be an understanding that they truly were brother and sister. Emma is the fifth cat in the family, now three girls and two boys strong! In addition to Cosmos, two other siblings are Kitty Angels alumni: Hari Kumar and Hannah. The fifth cat, Camille, was also a stray rescued by her mom.

"All the cats seem to enjoy and appreciate each other and take their turns at the windows for their beloved bird watching. Emma has added an extra love element to the bunch - she loves to groom the others and always has a 'head butt' for whomever she meets. The games of chase and ball playing are nearly always followed by a short 'cat nap' in the sunny living room with the others.

"Emma has completed my cat family. It's so rewarding to look around my house now and constantly be reminded of their unconditional love, happiness, and the miracle of rescue and a second chance. They always cause me to smile and be grateful."

Inca, aka "Inkster", was adopted in January 2002 by Brett, who writes, "Inca had survived a harsh winter outdoors before being rescued by Kitty Angels. He is now settled in and filled with contentment. He is affectionate, touches noses and sleeps in my lap at every chance. He's a real buddy of a cat. I'm glad I have him, and so is he." 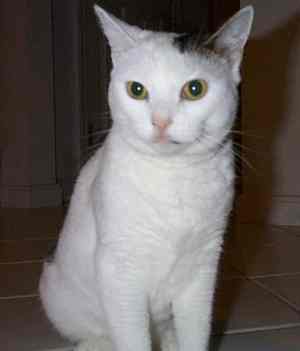 Melinda sent us this picture of Dahlia, one of the many FIV-positive cats who found new homes through Kitty Angels. She writes, "I adopted Dahlia in October of 2000. She was the most unusual-looking cat in the store at the time – those exotic patches of grey and white all over. Her name certainly fit her appearance. She was overweight – she had FIV, and her foster home had to keep her separated from other cats, with little room to run around. I didn’t care one bit, nor did I mind that she might require lots of veterinary care. When I was told that a family tried to adopt her and returned her saying she was too "wild", I knew that in a different home, she would settle down.

"At first, Dahlia was quite timid and aloof. She barely came by me for attention, and then it was only to get food. Now, she insists on sitting right in front of the sink on the floor, because she knows I need to put my feet there! She also lets me hold her now, and wants to be cuddled when I get home from work.

"Dahlia has only needed to go to the vet three times for her FIV in the 2.5 years that I have owned her. FIV cats can lead happy, healthy lives in good homes. Dahlia certainly is happy! And so am I."