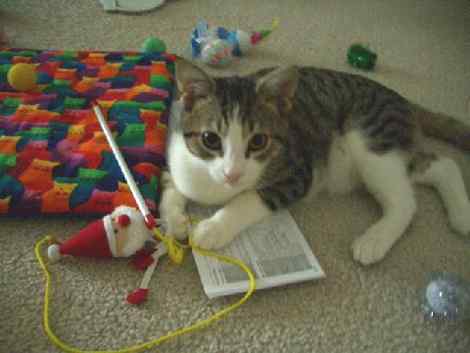 "Hi Kitty Angel Friends. I'm Chance, adopted October 2004. I just wanted to touch base with you all and let you know how wonderful my life is and that I am doing great! I have really bonded with my mom, I have become quite the lap kitty and can't stand to be out of my mom's sight. Yup, I'm quite the mommy's boy and not afraid to admit it! My first Christmas was very exciting - I received soooo many presents from the whole family!!! Well I have to go for now - just wanted to let you know I'm doing great and love my family." 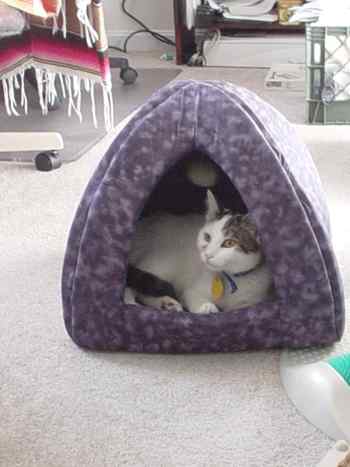 Lynn writes, "Over Thanksgiving Weekend 2004, Kitty Angels introduced me to Peter Pan, who had been found outside with his two sisters. He was nurtured to good health and ready for a home. When I stopped by PETsMART, it only took one look to realize what a special little fellow he is.

"Peter Pan has warmed my heart as well as that of my cat Ally, a 7 year old Maine Coon mix who had had the sole run of the household. Peter has worked his magic with her, as she has accepted an addition to the family very well. He is smitten with her, following her around and playing with her as they chase each other around the house. Peter Pan, while still a little shy to humans, has shown his gradual trust day-by-day, with a deep loud purr when in your arms. He has found his place on the bed at night and earns his keep of hunting his toys and displaying his prey.

"I never knew my heart could love more than one pet as much as I love my first cat, but Peter Pan has made me see that the love for pets is limitless because it is reciprocal and contagious. I could not have a better addition to my furry family, thanks to all at Kitty Angels." 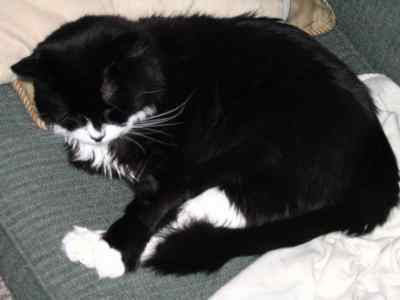 Chesney and Robert write, "Around October of 2004, my boyfriend, his mother and I adopted Georgie.  He was a year old and tested positive for FIV.  He has been such a sweetie.  He can certainly be manipulative, too!  He rolls on the floor, begging you to pet him and when you reach for him, he rolls juuuuust out of reach, and looks at you as if to say 'pet me!'  And, because he's so cute, you can't help going to him to pet him.  He likes to make YOU go to HIM.  Also, if you're not paying attention to him, he walks about meowing until you pat the couch or the bed, just so he can refuse to join you.

"He's been awfully sweet, and a typical cat.  He has lots of toys to keep him busy.  He really likes to look outside and watch the birds from the sliding glass door.  He likes to sleep at the foot of our bed each night and rewards us with his love, despite his manipulative feline ways.  He is VERY spoiled, and we know it, but we both have such a hard time not spoiling him, because he's so cute!  Even though he has a lot of toys, there are some times when he gets bored.  We know he can be a very jealous cat, but we are thinking about adopting a companion for him in the future when we move out and get our own place.  We think it may take some getting used to and he may be jealous of the new cat at first, but we also think with time, they can become inseparable pals." 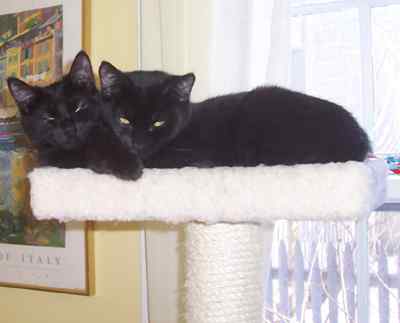 Torrey writes, "Lola and Moxie have settled into our home wonderfully. They love to cuddle up together and fall asleep. They keep me laughing with all their antics and I can't thank you enough for bringing them into my life. Thank you for all the wonderful work you do." 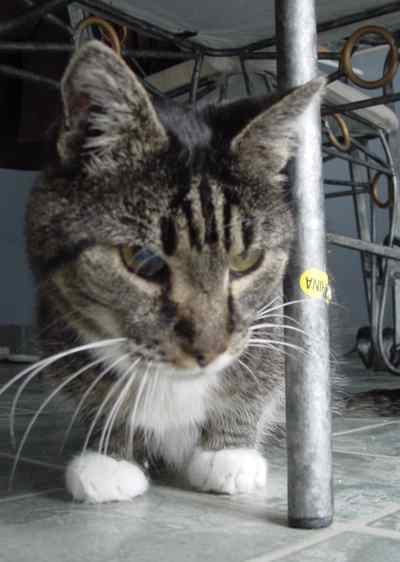 Brian and Angi write, "Sinbad was at Kitty Angels for three years; he was found in Lawrence abandoned and abused. He is blind in one eye from that, and was very very afraid when we first got him - he hid under the bed for weeks and then behind the TV or speaker stands. He has now come out of his shell and greets us at the door when we come home.

"Sinbad has a great and loving home and we are glad we adopted him - he is such a great cat. The folks at Kitty Angels are always happy to hear new stories about Sinbad when we see them at PETsMART in Nashua ... Thanks, Kitty Angels."