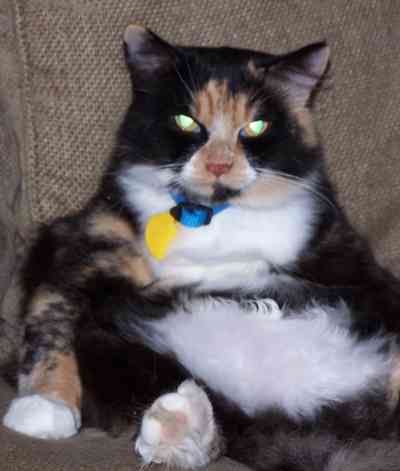 Michelle and Jeff write, "I just wanted to drop a line to let you know that Meg is a wonderful addition to our family. We changed her name to Athena. We thought she had a little too much attitude to be a Meg. She's gotten used to the dogs and they've been nice to her. She loves sitting in the windows and laying on the catnip mats. Last night she snuggled up in the crook of Jeff's arm when he went to bed. Although her purr is very quiet, we can feel her purring anytime we're petting or brushing her. She's very happy and we're thrilled to have her." 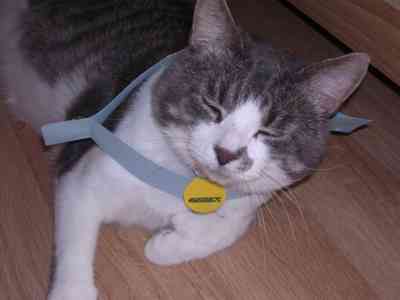 Marie writes, "I wanted to share some pictures of Q-Tip at home. But first I must tell you that he really has given our daughter Anna so much in the two short weeks he has been with us. As you may remember, we adopted Q-Tip for my daughter after she recovered from her 3rd open heart surgery. As we hoped, he helped her shake off a depression that a two week hospitalization can bring to a four year old.

" The two of them became fast friends. She is taking her job of feeding him very seriously. She loves to have him snuggle up as we read the bedtime stories for the night. Picture it...he's snuggled in between the two of us, listening contently to each page. His mild temperment is a perfect match for our loving and creative daughter. (See pictures for a peek at his custom made collar) It's as if his only goal for the day is to be patted as possible in between his naps. Anna is happy to fill his quota of snuggles. If she could figure out how to purr, I think she would! She giggles as he huntsand swats invisible specks of dust. Anna hardly wants to leave the house to run errands or go on playdates. She eventually whines from the back seat, "I miss Q-Tip. Why can't we bring him with us everywhere we go?" She proudly tells anyone who will listen about how Q-Tip lived on the streets before we rescued him. She knows that they have a connection through their ability to beat the odds and survive!

"Thank you from a mom who wondered if she'd ever hear her daughter's laughter again." 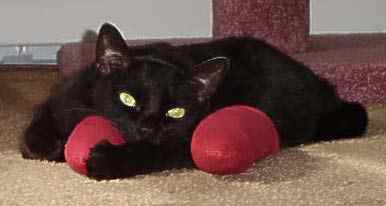 Kevin and Pamela adopted Najeeb in September 1994. They write, "He was only four months old at that time and rather a skinny little thing that kept coming up to us. His double pawed brother was too much - this little kitty was fine. His mother was a Russian Blue, but they didn't know who Daddy was.

"We named him Najeeb and he will be 12 years old June 2006 - and he still enjoys playing with his toys. He is very smart as he knows the word 'treats' and 'do you want some food?'  Najeeb is active (he still has his waistline!) and is known to run around the house at 3 in the morning! He likes cuddles and has a big purrr. We hope to have Najeeb for many more years." 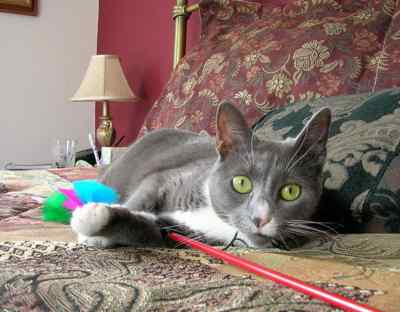 Joy and Chris adopted Serenity in January 2006. They write, " We were looking for the perfect little girl to bring into our one-cat home and she definitely fit the bill!  She's getting braver each day that goes by and we are constantly finding new things to love about her.  Her half Siamese personality makes her very vocal and we are really enjoying getting to know her very own language.  Each little mew and chirp is so sweet!

"Our resident cat is finally starting to accept her so she's learning to have fun no matter what room she is in.  I used to think it would be impossible to love another cat as much as we love Gilligan (our resident male), but I am happy to find myself loving Serenity just as much as I love Gilligan. Her appetite sure didn't wane with the move she experienced and she's learning that our laps are just as cozy as her foster-families.

"We're happy to have her here and feel very blessed that our home is the one she graces.  She is the perfect completion to our little family. In the picture Serenity can be seen playing with her favorite toy.  Her eyes are captivating! Thank you again for taking such a sweet kitty into your hearts and helping her become healthy.  She's a doll!" 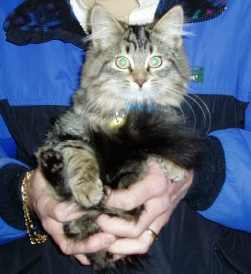 Kodak was adopted in November 2005 by Rick and Sherry. Kodak writes, "It's me! Kodak, formerly know as Roy-boy #4. Golly-gee, can you believe it? I'm packing on the pounds quicker than you can say Iams. Thought I'd send along a self portrait of one handsome Maine Coon for the alumni page.

"How did I get my name? Well, the day Aunt Helen brought me to my new humans, Rick and Sherry hadn't picked out a name for me yet. Aunt Helen told them that I'd be soooo photogetic that the flash might burn out! Photo, camera, a wonderful moment. HEY! lookie here, a "Kodak" Moment! So, there you have it!"