Symbol was adopted by Nicole, who writes, "When we finally decided that our resident cat, Ticker, needed a playmate we came to Kitty Angels. When we saw this adorable little kitten, we knew we had to have her and give her a very loving home. We named her Symbol and she is such a cutie. When we first brought Symbol home, she was very scared, but within days she loved being around Ticker. Now, she has to follow him wherever he goes and always has to be right next to him (and doing what he is doing!). She is the cutest little girl and they are the best of friends!" 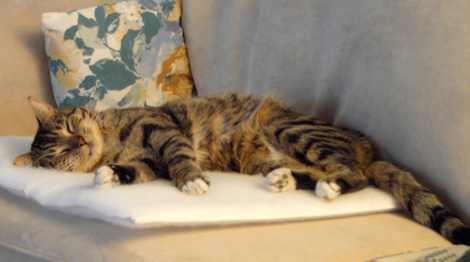 Winston was adopted in February 2006 at age three by Michelle, who writes, "My husband and I adopted Winston just yesterday, and he's already made himself at home. When we first met Winston at the PETsMART, he seemed quite happy to see us and for me to pat him - he even started climbing on my shoulder as if he had known me forever! Now that he's home, he is a big lovebug, and loves to sit in my lap and cuddle; in fact, I renamed him Winston after my first teddy bear, because he's so cuddly. He also loves to follow me and my husband around wherever we go, and starts meowing if we don't pat him within a few seconds of his arrival. I'm so happy we've brought him home with us, and I want to thank you for making that possible!"

Oreo dictates, "In December, 2005, I snuck into Barry and Bridget's garage, and you made it possible for me to move into their hearts. It's hard to beleive it's only been a couple of months, but I've been spending half of my time stuck to them like glue, and the other half of my time enticing the kitties I moved in with to play with me. I thrive on being picked up, hugged and kissed. If the other kitties are feeling too shy to be chased, I get them to chase me. I'm very talkative, which comes in handy because I can't help but be under foot. I'm so happy to be in from the cold and part of a big new family... Thank you so much for helping me when I needed it most!!" 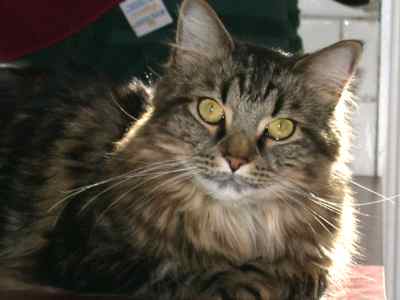 Devon was adopted in September 2003 by Diane and Stig, who write, "In December of 1993 I had brought home from Kitty Angels a VERY shy and timid Tyler, who became the love of Serena's life. Serena is a tiny tortoishell. Serena gently brought him out of his shell over time. He was our Prince Charming. When he passed away in 2003, Serena had lost her companion and true love. We all were as lost as she was, he was such a gentle giant at 23 lbs, compared to her 7. I knew it was no disrespect to Tyler to search for a new companion right away, he would want someone else to have the same chance at love and a good home as he had. I immediately thought of Kitty Angels. When I told Joan of our situation with Serena being 11 now, she said she had the perfect new friend for her. She was so right!

"Four year old Devon was a little over a year old when we took him home in September 2003. He had been found at the Prince Spaghetti plant in Lowell, caught in a chain link fence that required some surgery to his back leg. You would never know that now, with the way he can race through the house, chasing, or being pursued, by his younger playmate who is just one. Sometimes he is a bit too frisky for Serena, forgetting she is his senior by ten years, but they love to sit side by side and chatter at the birds and squirrels in the yard. He is the first one to greet you when you walk in the door, and loves to sit with you as you watch TV or read, so he can get his tummy rubbed. His antics keep everyone amused, as he loves to scoop water with his oversized paws,beg for a treat and plays "eagle" when he hops on top of the kitchen cabinets and oversees what is going on. He is one adventuresome boy!! We love him to pieces, as do his feline sisters, and are so grateful to Joan for rescuing him and allowing him join our family."

Kelly writes, "Buttons was rescued from a DPW equipment warehouse by Kitty Angels when she was a kitten. When we first brought her home, she was very nervous and liked to hide all day long. Step by step and bit by bit she has come out of her shell and has let her spunky personality shine! We named her Buttons because she is 'cute as a button.'

"She loves toys that jingle or make a funny noise. One night we woke up to the sound of her sitting on the keyboard of my husband's laptop, making it go 'beep - beep - beep'. She sat up straight - so very pleased with herself!

"Buttons favorite place to sleep is under the covers down by our feet. She gets very excited when we have grilled cheese or when we make microwave popcorn. Buttons has even gotten more vocal over time - she cries when she gets frustrated or when she wants our help. We love her to pieces and can't imagine our home without her."