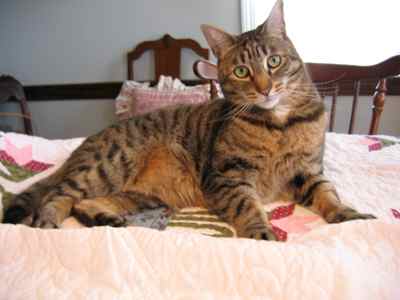 Tyler was adopted in March 2000, at the age of eight weeks, by Patricia, who writes, "Tyler has been a marvelous addition to our family - he has two older cat 'brothers,' who are both 14, and a dog brother, a Norwich terrier, who is 11 - and then there are his people of course.

"I would have to say that Tyler is one of the 'loves of my life,' despite that fact that he can be quite a mischief maker. He likes to be right in the center of everything, even when it gets him into trouble. However, he knows just when to turn on the sweetness so he is always forgiven. Thank you for bringing him our lives!" 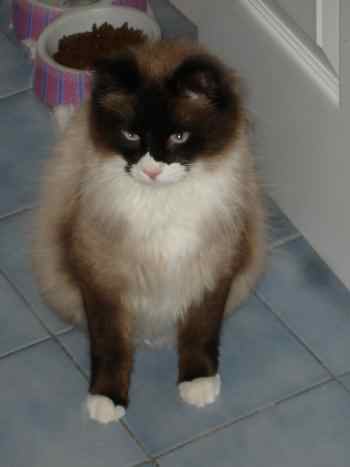 Denise writes, "Chance is doing very well. He gets along well with Jake, our orange and white Maine Coon Cat, and is making friends with Tiger Lily, who was just adopted from a lady who died at 91 years of age and wanted a forever home for her loved cat. Chance loves to eat and play with Jake or just hang out with me. We love him and are so happy." 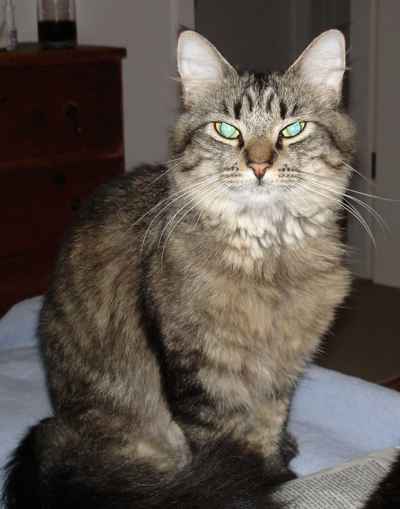 Sadie was adopted in February 2006 by Mary, who writes, " I am writing to you to let you know that the lovely kitty that I adopted is very happy in her new home in South Boston. Sadie was originally a semi-feral 8 month old kitten when I first saw her at the Nashua PETsMART near where I work, a beautiful long-haired tiger with a big bushy tail. She had been part of a group of cats rescued from a seasonal campground the previous fall.

"Following the suggestions that your director Joan provided for the introduction of a semi-feral cat into a new household, my husband and I first gave her a small bathroom to have as her own. She was very content to stay in a snug box with blankets, toys, food and a litter box for the first couple of days. But soon she became very curious about our adult female cat and the rooms beyond, and began to make her own exploration a little at a time. We were cautious at first about introducing our older cat to her, but she quickly began to tag around after her on her own. After less than a week she was fairly comfortable checking out the whole house by herself. We were careful during those first days to approach her quietly so that she didn’t panic or feel trapped, but she adapted on her own to the surroundings and to us almost immediately.

"These days she is totally glued to her big sister and behaving like a typical adolescent. She loves to chase balls of paper, watch birds through the windows and play with her toys, but she has really developed a fascination with certain television programs. Her favorite show is the "Dog Whisperer" and she will come from the other end of the house to sit in front of the TV when she hears Cesar Millan’s voice. Go figure.

"We are delighted that both cats are getting along so well together. As you can see from her photo, she is growing like a weed into a very affectionate young girl. I am very thankful for all the effort that Kitty Angels provided to save Sadie and her fellow rescuees. I hope that others will also consider adopting a semi-feral cat or kitten the same way that we have. It only takes a little more patience than usual, but the rewards are more than worth it.

"Thank you for everything you do for these lovely animals each day," 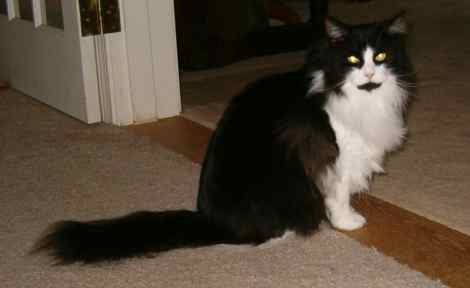 Moxie was adopted by Ingeborg, who writes, " What a special cat! Remember the little feral three pound kitten with the broken leg that I adopted? Well, she's now my long-haired lap cat, follows me everywhere, and even tolerates the dog! She lives up to her name! Thank you!" 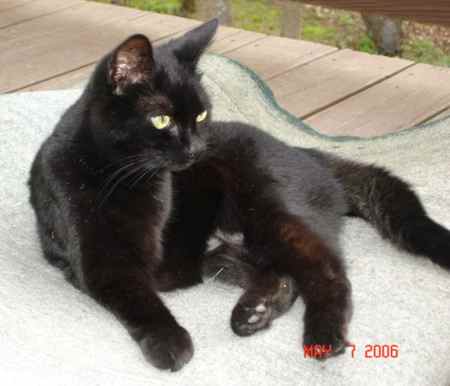 Denise and Larry write, "Hello - just visited your website and thought you would like to see Jelly Bean, ('JB'). She was six months old in January of 1994 and had her front leg amputated since it was withered when she arrived at your shelter. She was neutered at the same time and we received her in our home with stitches from stem to stern.

"She adapted well to our eight year old Persian, Tasha, rescued from a home where she was neglected. JB was soon joined by Joey, another KA alumni, who was 8 weeks old in 1996. 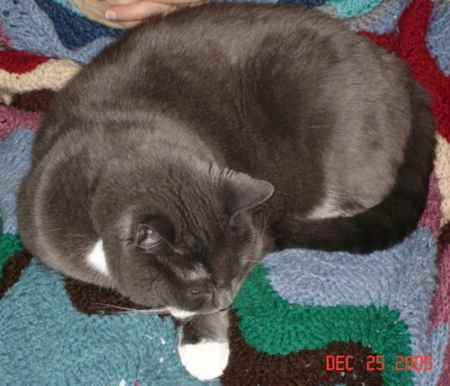 "Tasha and Joey have since passed away, and JB has been joined by another little rescue, Smokey,who was five weeks when found near a pottery kiln. She is is almost blind, and she was quarantined for 2 months in our home, but she now manages to keep JB active! All these loves, along with our two dogs, get along just great.

"Thanks, Kitty Angels, for the work you do! We have been so blessed to care for these wonderful friends for life!"