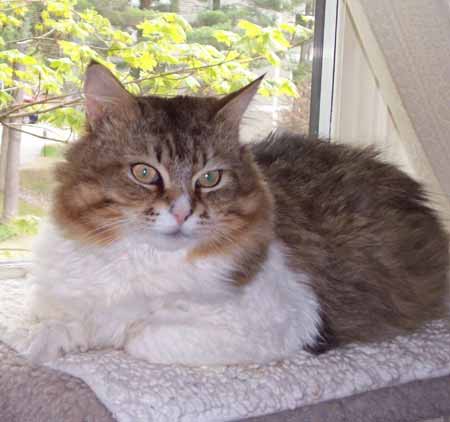 Dale writes, "I'm sending along a picture of Seamus, whom I adopted in the summer of 2007. He settled in right away and pretty much continues to rule the roost.

"Thanks for everything that you and everyone else with Kitty Angels does to bring kitties and humans together. " 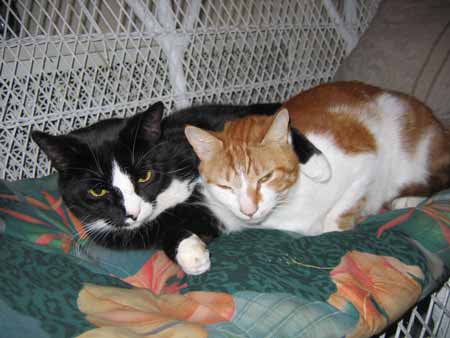 Beth writes, "Pepe ( the orange one) was adopted in May of 2005, and Toby (tuxedo)  in about Feb. of 2006.  They are best friends and are real Momma's boys as well.  They have been the most sweet companions I could imagine.  Thanks very much ... " 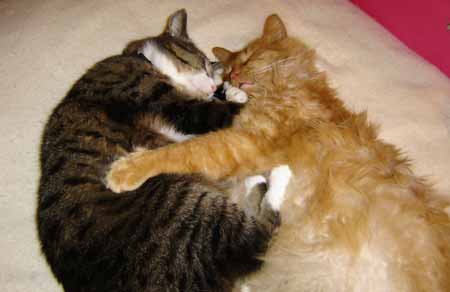 Audrey writes, "Dennis (left in picture) is a feral cat that decided he wanted to be a domestic cat. Kitty Angels thought that he was unadoptable. But, he adopted me. Years of hard work and bring him out of his shell paid off. He lived for couch time especially if it involved touching two people at the same time. He would head butt your hand if you weren't giving him enough attention and he loved little kids. He has two brothers, one from Kitty Angels and one from the Humane Society that he couldn't get enough of.

"He was a real miracle story. Helen thought that he would never be adoptable. He adopted me. I thank Kitty Angels for allowing me to love him." 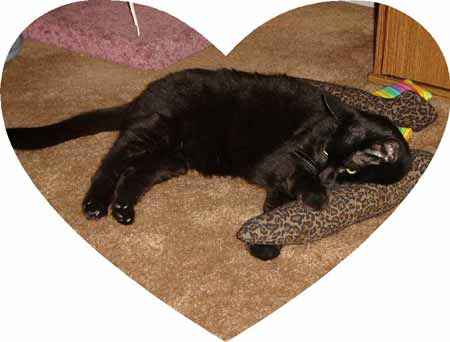 Pam and Kevin write, "Najeeb is 14 now! He turned that age sometime in June.. He loves to play each night when Kevin comes home with all his catnip mini pillows and catnip worms that are all homemade. He is such a smart cat too! He knows a lot of words and sentences. We are so happy to still have him and it looks like we may have him for many years to come!" 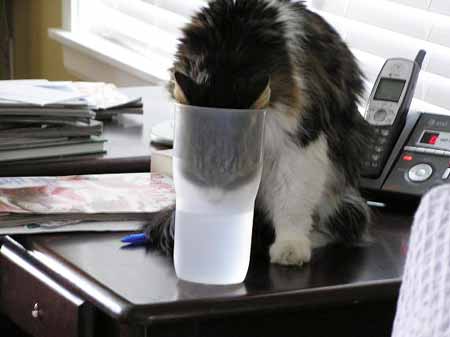 Mary Lou writes, "I adopted Tish July 1992. She was less than 8 weeks old from Kitty Angels. I remember riding home with her literally in the palm of my hand with room to spare. Now at the age of 16 she is still the love of my life. She a bit slower now and her kidneys aren't the best (daily IVs), but she is still going strong. She loves to sleep in the middle of her adopted shelter dog brother and sister's bed. Thank you for sending me my own little kitty angel." 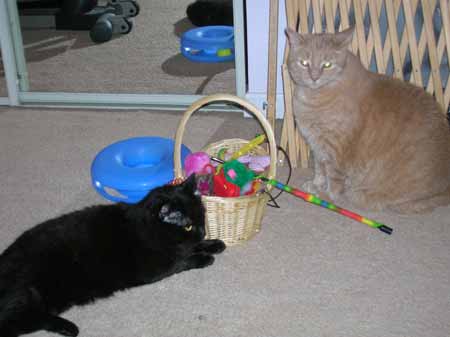 Jen writes, "Boo (on the left) sits with her "brother" Milo and their cherished basket of toys. Adopted in October 2007 by Jennifer and John, Boo quickly adjusted to her new home. Boo is a very lovable cat whose favorite time of day is mealtime. During the day she loves to lay in front of the sliding door in the sun watching the squirrels and birds in the back yard. She is also the perfect alarm clock, making sure everyone is up by 6:30 every day - her breakfast time."