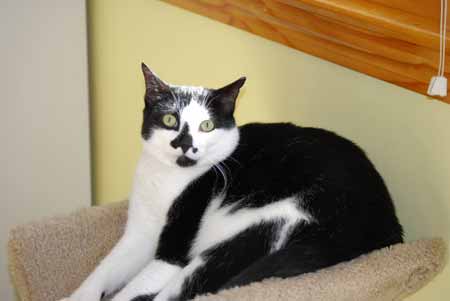 Dick and Johnette write, "Harry came to live with us in April 2006 as Alan – named after the man who climbed a tree to 'rescue' this shy, scared and hungry six month old kitten. At his foster home David worked very hard to get Alan comfortable with people. After he came to live with us he was still very shy with people and would find places to hide that a kitten half his size wouldn’t be able to get into – and with his black and white coloring he would virtually disappear so we decided to name him after the famous magician Harry Houdini.

"Now he is shy only with new people and is still pretty good at disappearing, although at his present eighteen pounds he can’t get into as many places as he used to. Usually after an hour or so his curiosity overwhelms him and he will come out to meet these new humans. We never thought Harry would be a lap cat but over the years he has become very sociable and will follow us around like a puppy dog, curl up on the sofa with us while we watch TV and will sleep at the foot of our bed.

"We’re so happy that we have Harry as part of our family." 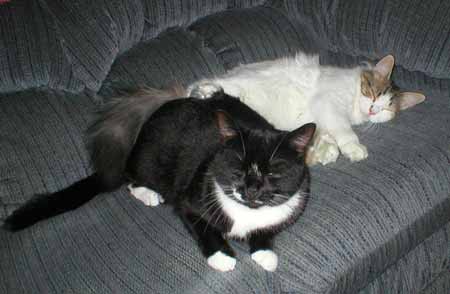 Joanne writes, "I adopted Randy (black & white cat on the left) in August 2006 and Iggy in July 2007.  Randy was two years old and Iggy was about a year old.  I was told Randy had been a stray and Iggy was a feral kitten.  They are the best little guys you could ever want.

"From the moment Randy came home with me he has been my best buddy.  The very first night he slept with me and he has been with me every night since.  He is an easy going, friendly cat and welcomes everyone.

"Iggy has taken more time to adjust.  He is very attached to me but is still afraid of anyone else coming into my house.  The minute he hears a car door he runs under the bed.  As soon as my company leaves, he comes back out.  He is improving slowly.  He will now let my daughters pet him when they come over.  He is a sweet little soul and is very happy to live with me and Randy.  They get along so well they act like brothers.  Where ever Randy goes Iggy follows.

"Thank you so much for the work you do.  I can’t imagine not having these wonderful boys in my life." 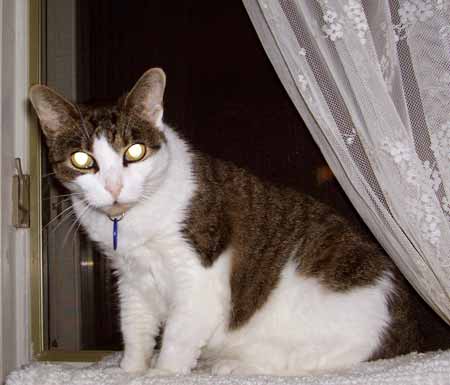 Dale writes, "I adopted Seamus, about a year and a half ago. He had a close girl buddy at the foster home, but I felt that she might be too much to handle (feral). I regretted that decision, and I felt that Seamus really wanted a pal. So about a year later, I adopted Morgan from the same foster home. Morgan bonded with me in a few days, but she isn't all that interested in the big guy. They do sniff each other through the fence I have across the door to Morgie's domain, and I have hopes that some day they might share space together.

"In any event, they are both happy living in their respective parts of the house. They are each unique, as each kitty has been over the years. I feel blessed to share my life with them." 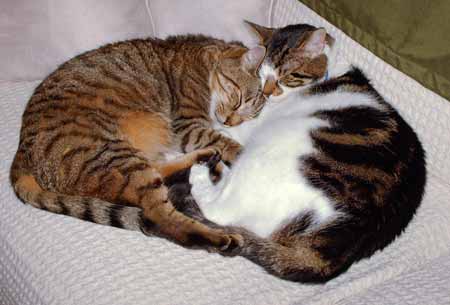 Karen sent in, "Bruno and Leon are getting along well in their new surroundings. They absolutely love each other and "play-fight" all the time. Bruno grooms Leon everyday, too. It's absolutely adorable! Here they are napping on my new sofa..." 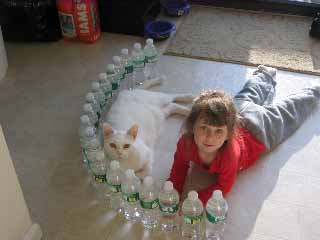 Gina writes, "I am writing to you about the most wonderful and affectionate cat we have ever met. We are so blessed to have Pickles in our life. We adopted Pickles almost a year ago from you and when I first met him at the adoption day he captured my heart right away. I started to pet him and he just did not want me to stop. I had to have him. Finally we were able to take him home and let him get all settled in with us. My 3 year old was away for the weekend with her father so it gave Pickles some time to get use to the house. This was a big surprise for her. When she came home I was a little worried to see how Pickles would react. To my surprise Pickles was awesome. My daughter came home and it was bedtime and of course she started to cry because she didn't want to go to bed. From out of no where Pickles ran right up to her and tried to comfort her rubbing himself all over her as if to say " it's ok I am here for you". It was such a precious moment. My daughter yelled KITTY!!!! Then she started laughing and said 'Mama he pickles me' Translation: he tickles me. Now of course I was thinking of names for him like 'Abominable' or 'Puff Kitty' or 'Goliath' because of his size, but 'Pickles' just kind of stuck.

"When my daughter is away he sleeps in her bed, and when she is home he sleeps right next to me or tries to sleep on my head. He is learning that the sleeping on my head is not going to work. I have found that he is also an alarm clock. Just after I hit my snooze button for my alarm Pickles makes sure that I get up by voicing very loudly that I have to get up and go to work. He won't stop until I get out of bed, then he goes back to sleep. He is a great little snuggler too, and has a purr like a freight train!!! Thank you for the wonderful addition to our family. We could not have asked for a better gigantic kitty."