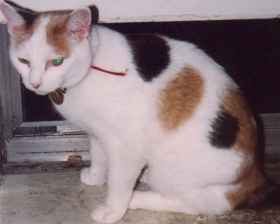 This is Cil, adopted by Elaine, who tells us that Cil is adjusting well to her new family, which includes two other cats. 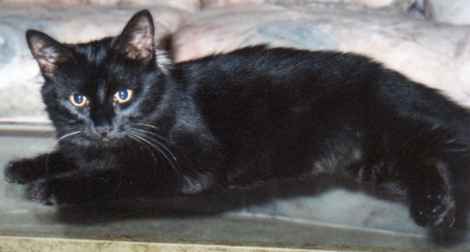 Bently (formerly "Sooty") was adopted by Julie in January 1998. At the time, Bently was very shy - it took six months before she would allow herself to be petted, but now she loves to be brushed and played with. 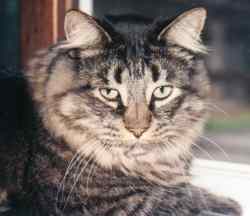 Mad Max (left) and Lucky (above) are brother and sister. They were adopted by Ken and Brenda in July 1994 which brought their cat family population up to six. Max, who weighs in at 23 pounds, has a phone fetish. He loves to take the phone off the hook so that he can listen to the voices. He lies down on the receiver, listens and purrs away. Lucky's other name is Wild Woman. She loves to crawl into dresser drawers, drag out underwear and give it to the dog so that he can chew it up. She's always on the go and looking for trouble.