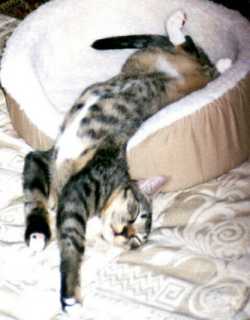 Kirby, (formerly Andy), was adopted in June of 1999 by Kari and Victor and was only a kitten at the time. Kirby is growing into quite the little tiger! He loves to run and jump and will do backflips just to try and get his featherstick cat teaser! He also is very vocal and learns new tricks quite easily (he can catch a treat in a mid air flip) and his greatest love is to stalk the birds at the feeder through the window.

Kirby is always on the go and never rests for a second except when it is bed time at night and then he is ready and waiting once he sees the covers turned down. Kirby loves to sleep in the crook of Victor's neck and will vocalize his happiness frequently through the night. He also has a gray tiger female companion of about the same age named Ripley, who was a stray kitten we took in and hand bottle fed. They get along great but when it comes to toys - Kirby wants them all !!! 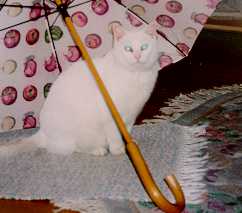 Joey was adopted by Rosemary in October 1999. He is very happy in his new home where he has established himself as the boss. Joey now has a new "sister" to play with: Molly, a 4-month-old English bulldog! 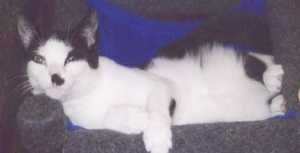 Dot was adopted by Jenn and Scott, who write, "She gets along great with both our male cats. She sleeps with them, plays with them, and even licks Fog clean. She is very friendly and affectionate with me and Scott. We are so glad that we got her - she makes our lives more enjoyable. Thank you." 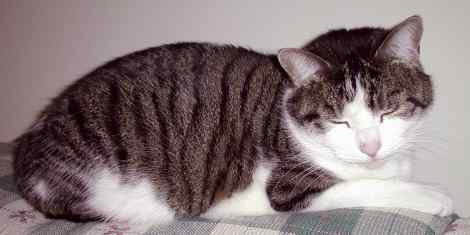 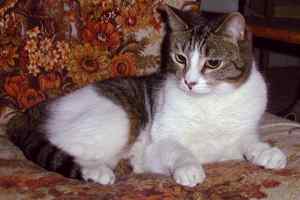 Laurie adopted Minu (above) and then Boulder (left). She writes, "Thank you so much for these two wonderful cats - I can't imagine life without them!"