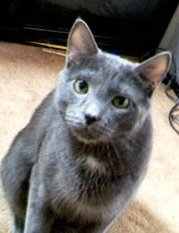 Marsha writes, "Bashful is a beautiful and very large kitty. He is the brother of Angel (below) and they were adopted together. When they first arrived, he relied heavily on Angel to tell him things were ok. He was less than a year old and already had his tail broken and a broken rib. The poor baby had been abused.

Through the last couple of months of showing him that humans can be gentle and kind, he is responding beautifully. He no longer leans on Angel, he walks around the house like he owns it (cats do, don't they?) He loves to play ball with Elvis (his big kitty brother) and he runs and races around. He loves to talk to everyone and expects you to talk back, which we do. He loves to be petted but isn't quite comfortable enough to be held for more than a minute. I think in time he will be though. We are so thankful that Bashful came into our home and lives." 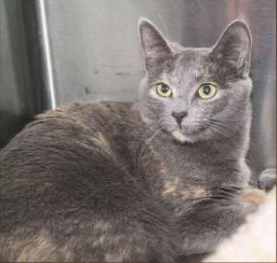 Marsha continues, "Angel was adopted along with her brother Bashful into our family of four humans and two other cats, whom we refur to as "furbabies". Angel adjusted rapidily to her new home, humans, and new siblings. She has such a sunny disposition that everyone just took to her immediately. She is curious and fun loving. She loves running up to one of the others while they nap and give them a little lick on their face.

She also loves to watch me at the computer. She seems fascinated by my design programs. She also knows I keep pounce treats there for her and the others. One of her favorite things is to perch on one of my son's shoulders while he walks around the house. She seems to have no fear of anything but loud noises. We are so happy to have Angel in our life."

Dave and Jennifer write, "We adopted Jessie and James in August 2001. They moved with us to Salt Lake City in 2003, and have adjusted beautifully both to the move, and to the two 'human kittens' who have joined our family since then. Jessie is particularly possessive of our new son, born in June. I can't tell you how much joy these two have brought to our life over the last 5 years, and couldn't ask for a better pair to be our children's first pets.

"P.S. James is now nearly three feet long, nose to tail, and we still find him sitting in the top of the Christmas tree at least once every year." 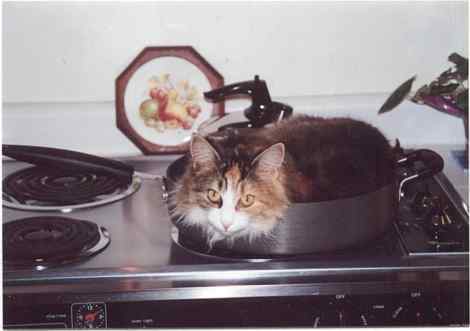 Pat writes, "Aran and I wanted to send you a recent picture of Mopsy, the kitty we adopted from you on 12/30/2000. We usually don't cook her on the stove....I had just finished cooking pancakes for Aran and had cleaned the pan and popped it back onto the burner which was still warm. Mopsy thought it was snug and cozy and hopped right in.

"Mopsy is doing well and has grown into a fine cat. She has adjusted to Aran's school schedule; sleeping during the day and coming alive at 3:15. She has a fettish for bottle caps (she is picky and only likes the clear plastic ones from the top of sports bottles and maple syrup containers). Mopsy carries the cap around until someone tosses it for her. She will then have a hockey game that will keep her running around the kitchen, dining room and living room sliding on the wood floors and banging into walls and furniture...her furry little paws make great ice skates!

"Thank you for finding our little Mopsy!"